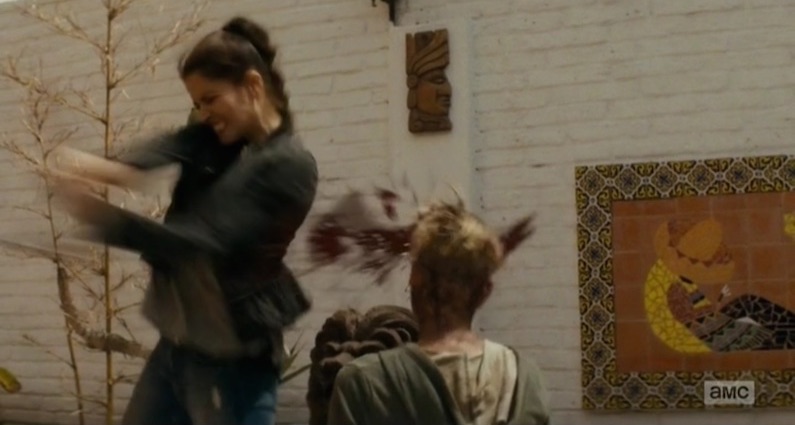 Talking Through Pillar of Salt

Two weeks, three episodes are how much time we have left with Fear the Walking Dead; two steps forward, three steps back is kinda how we feel about episode 12, Pillar of Salt. Unfortunately, things took a downward turn during this episode, and it was mostly because of one character. As I said in the episode, Madison is as unreliable as Nick is in her actions and motivations. However, I think that perhaps the roles have been reversed because Nick appears to be doing quite well. But Madison just can’t accept that he’s gone and that the daughter she has right in front of her still needs her. I hope that the next three hours will be enough to change her into a character that I really do want to follow and care about. Because as of right now, I really, really don’t.

But who knows what will happen in the future? Three hours can be a long time in TV land, and Madison can still turn it around, especially if Travis shows up. His character also has some things to work out that will perhaps be addressed next week. All we know is that we saw him at the end of this episode with no Chris in the shot, making at least one good thing to come from the beacon that Madison lit for all to see.

I’m not sure if we talked about why they had to sneak out of the Colonia, but it was something I was wondering about. It seems they should have done a little bit more sneaking since they got snatched up almost immediately. I’m not quite sure what will become of Ofelia, if she will eventually turn around and try to meet back up with our group, or if she will just head off the show into the same no man’s land where Morgan hung out. I still think she should have left a note at the very least tell them where she was going. Maybe she just figured they wouldn’t care. Alejandro doesn’t seem long for this world, but I don’t know if it is because he is actually infected, or if it’s because the Narcos found them. In any case, he seems to be falling apart a little bit. He is also holding on too tightly and just like water, the Colonia is slipping through his fingers.

Tell us what you think is going to happen in the next three episodes by giving us your feedback. We love to hear from all of our listeners, especially in audio! For Fear the Walking Dead Season 2 Episode 13, titled Date of Death, please submit your feedback by 6 PM Eastern/5 PM Central Tuesday, September 27, 2016.