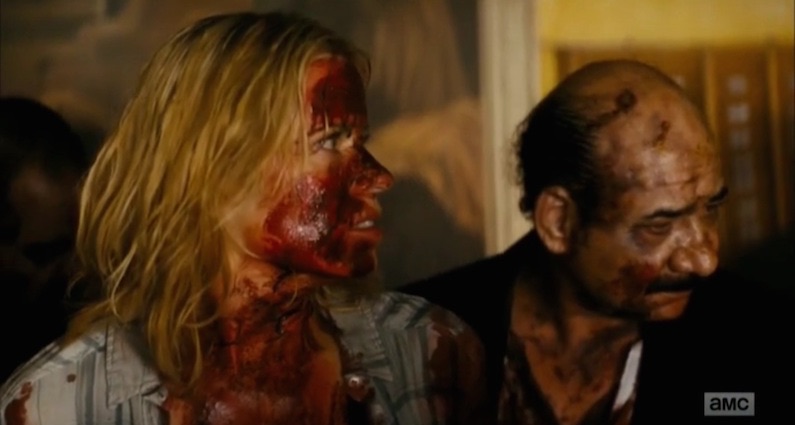 And the hits just keep on coming! We liked this episode about Pablo and Jessica better than the last episode, which makes us very glad. It also makes us hopeful for the future of the series as far as the quality of content goes. However, the ratings keep taking hits. Perhaps the rest of you are not liking Fear as much as you did? That would make sense, given our reactions to the show. We might just so happen to be a little bit predisposed to like them, though! As we discussed in this week’s episode, the ratings may be dipping, but the show is still on top. They don’t have to worry about securing a third season. We hope they can focus on making the show great!

I know we talked extensively about the use of the gore camouflage, but I think it bears repeating that the show seriously needs to move away from this crutch. Don’t put your characters in situations they can’t get out of unless they use this worn-out tactic. Find other ways to make them survive, or don’t put them in that situation. Continuing with the hotel storyline, I appreciated that while the guests weren’t necessarily ready to help, Oscar was willing to give the keys back to facilitate Stradison’s plan. I really liked it that both characters in the title, Pablo and Jessica, weren’t actually in the episode at all, or as in the case of Pablo, not even in the show at all. But both of these characters are big motivators for at least two other characters in the show. Even when they aren’t there, their presence is felt by those who miss them the most. This causes some interesting and potentially destructive behavior.  We can’t wait to see what will happen next week!

I really want the hotel to stay the focus of the rest of the episodes because so far it’s my favorite of the three stories. But what I really, really want is for you all to tell us what you think! Send us some feedback and tell us what you want to happen in the rest of the episodes. Or tell us what you think will happen in the remaining episodes. Tell us your predictions, or answer some of our burning questions, like who took the truck (Ofelia?), and who really bit Alejandro? We are waiting to hear from you, and remember as always, we really love when you all send us audio feedback! For the next episode, Fear the Walking Dead Season 2 Episode 12, titled Pillar of Salt, by 6 PM Eastern/5 PM Central Tuesday, September 20, 2016.