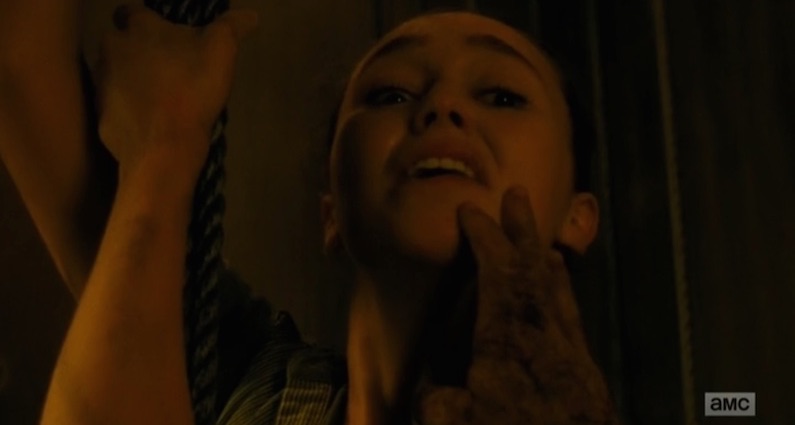 Talking Through Do Not Disturb

Do Not Disturb is our third episode back, and so logically we catch up with our third group: Travis and Chris. The first scene we see what became of the ill-fated wedding party, but then we immediately go to the father and son wonder team. Although Chris seems really happy to have his dad with him, he doesn’t really seem to be on the same page as Travis. Travis is trying his best not to lose his son, but he can’t seem to compete with the bro-tastic trio. Chris ends up showing his murdery side when he kills the owner of the chickens, and Travis doesn’t seem to know what to make of this new turn of events.

Back at the hotel

However, back at the hotel, we finally learn who was putting up the do not disturb signs on the doors, and while there were a few tiny plot holes in the scenes at the hotel, overall I think we both liked them better. Elena seems like a much more sympathetic and likable character than we’ve seen in a long time, and major points in her favor: she is not the frat-bruhs. I think we are also both liking the character of Alicia better than the others right now.

And now for a few things I may or may not have mentioned already in the podcast, but I wanted to mention again. I’m not sure that Chris will be able to travel back from the dark side of the force because he didn’t even seem the least bit bothered by what appeared to be the dead bodies of the store owners. This does not bode well. The question is, will Travis stick with him, or will he eventually give up on Chris, and if the latter, how long until that happens? Or has it happened already? Back to the hotel (I’m now hearing music and song lyrics in my head) scenes, Alicia and Elena seem to bond rather quickly, and also to trust each other quickly. She finally gives up the keys to the guests, is this because she sees Alicia’s plan, or because she trusts her already?

We need the answers to these and so many more burning questions, so leave us your feedback and tell us what you think! While you are out tromping around the internet, go check out our donation page for MS. It’s still open as of the writing of this blog post, but we don’t know how long it will remain that way. For Fear the Walking Dead, Season 2 Episode 11, titled Pablo & Jessica, please submit your feedback by 6 PM Eastern/5 PM Central Tuesday, September 13, 2016.