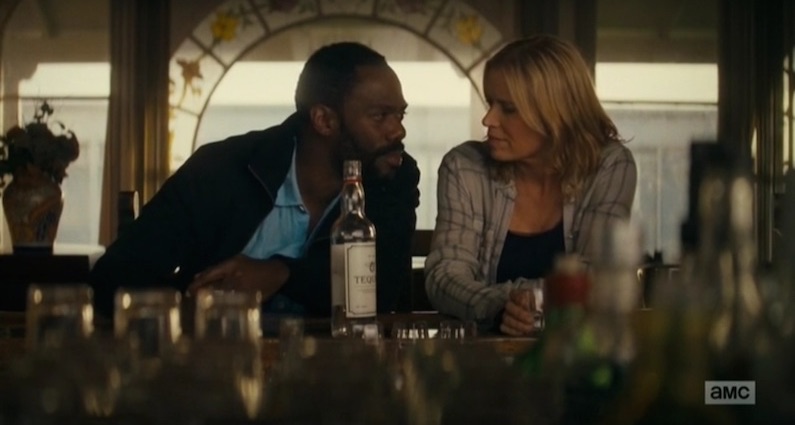 The second episode back, Los Muertos, felt like it should have been the first episode back, but I guess you have to get Nick there first. Both of us enjoyed this episode more than the first one, but there are still kinks that need to be worked out. Unfortunately, when a show isn’t doing it for you as much, or any more, the desire to overlook those little inconsistencies goes away. But we are still watching and looking for the good, and I hope we don’t ever get too negative so as to turn off our listeners. If that is ever the case, won’t you please let us know so that we can course-correct?? However, I have a feeling that fewer and fewer of you are also still watching. But, you’re still listening to us, right? Right…?

How did that little girl understand Nick when he asked her what was wrong? Was it his tone of voice? Or did she really understand English? The latter seems less likely, but maybe she was just telling anyone who was around what was up. Does Nick actually get his addictive personality from his mother? She seemed to be hitting that bottle pretty hard, which, as we all know, is completely foolhardy in the zombie apocalypse. Nick seemed like he was sitting pretty thinking he was walking the talk, so to speak, after negotiating for that second cart, but in this instance, I have to agree with Luciana on this one. It wasn’t his place, and he might very well have placed that whole community in danger. Poor Nick is just such an impressionable young lad, he seems to be easily lead to whatever new ideas are spouted in his general direction. I wonder if something will happen to snap him out of his current mentality.

We got one looooong bit of feedback from Kyle, and one from Judii, but the rest of you leave us wanting more!! We are positively dying to hear from all of you, so please, please, PLEASE leave us your feedback!! That is if you’re still watching. And, honestly, even if you’re not. Tell us what you had for breakfast…or lunch…or whatever else is going on in your life… For the next episode, Fear the Walking Dead Season 2 Episode 10, titled Do Not Disturb, please send in your feedback by 6 PM Eastern/5 PM Central, Tuesday, September 6, 2016.