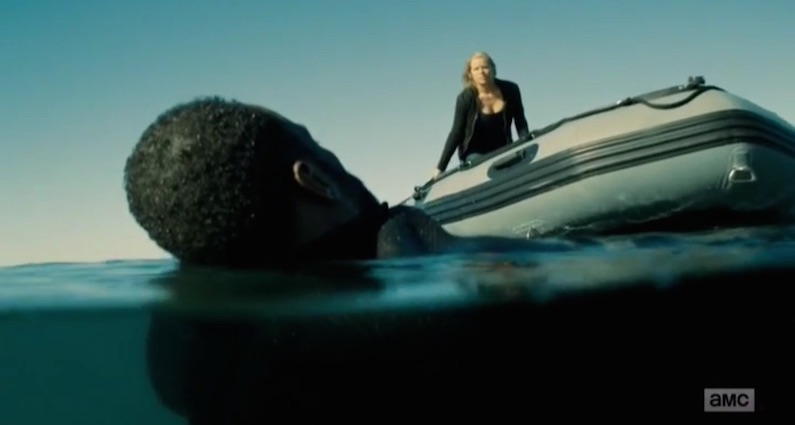 Talking Through Blood in the Streets

Blood in the Streets is episode 4 of season 2 of Fear the Walking Dead. This episode is a rare gem for either show in this universe because it gave us Strand’s backstory! I don’t know if they always planned on giving us his backstory, or if they did it because he became such a fan favorite the moment he appeared on the screen. I was definitely excited to learn more about this very intriguing character, but what is also interesting is how this backstory can be interpreted differently. What seems like a no brainer to one could still be viewed more than one way by another. It seems Strand’s intentions are still not crystal clear. Is he playing a long con, or does he really love Thomas Abigail? Only time will tell.

And now for a few more points about the episode. Although it does appear that Nick is really getting the hang of the zombie-apocalypse, diving into the tent without checking it first seems like a huge risk, as well as trapping himself in a place with only one exit. It seems clear that he has more learning to do, but Nick, he will do it fast. When we recorded, I couldn’t specifically remember the lights in the cold open, but I went back and looked and I think that perhaps the lights were the flotilla that Luis said they had to get through. I think the “bad decisions” that Ofelia said Chris still has time to make will be quite different from the bad decisions she made, and actually, have nothing to do with liking a girl.

I also still want to know why Strand tried to ditch the Abigail instead of staying, so if you think you know the answer, please send us some feedback and tell us! Was he going to try to get to Luis and Nick for backup? If so, why did he think he would be able to make a getaway? For our next episode, Fear the Walking Dead Season 2 Episode 5, titled Captive, please submit your feedback by Tuesday 6 PM Eastern/5 PM Central.