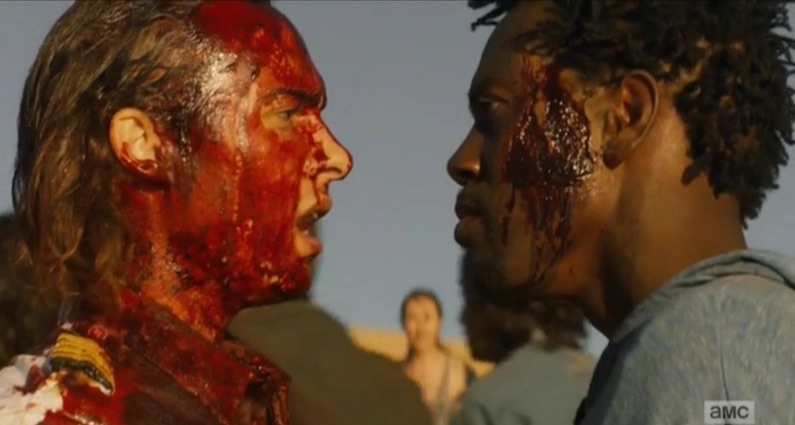 We are back to our normal selves to discuss Ouroboros, Fear the Walking Dead Season 2 Episode 3. At least, I am back to normal! I was able to catch a few more zzz’s this week. I did not have to focus all my energy on forming coherent sentences! And yes, Brian was normal, too. But what an exciting episode! Perhaps the best episode of Fear yet, this episode was packed with all the things we love about this world. There was an infected horde that mobbed our characters on the beach. There was also an underwater scare with an “infected” filtration clog, and of course, good ole fashioned death threats. Is Madison capable of carrying out her promise to throw Strand overboard? Strand doesn’t think so, but I’m not so sure. Brian pointed out that there is not really a clear leader of the Abigail crew yet, and while I want it to be Travis, I think it will probably end up being Madison. But what do you think?

We also finally got to see the grisly outcome of Flight 462, but by the end of this episode, things were not looking good for what seems to be the final two passengers. Will we ever see Alex or Jake again? I think we will at least see Alex again, Jake I’m not so sure about. However, I have no idea how they will get out of the predicament that Strand put them in, and I’m still not sure why he didn’t want to even tow anyone else. Perhaps it really did just have to do with the extra drag, but Strand is still mysterious enough that I think there was another reason behind him cutting the tow line. He has a purpose that is not yet known by the other characters.

Speaking of Strand, a few more things I may or may not have mentioned in the recording. Strand thinks that a little ego-stroking will get Travis to work faster, but I think what he said and how he acted didn’t help. It’s not the U.S.S. Enterprise, and they are not Kirk and Scotty. I think Travis is right to be annoyed with Strand, but at the same time, I’m reminded of “we all have a job to do…” I still don’t understand why the horde on the beach meant that the Abigail had to be ready to move right then. It doesn’t seem like the infected on land posed any real imminent threat to those on the sea. I’m also still curious about the implied time limit to get to the house in Rosarito, and what will happen if they don’t make it on time, which of course leads back to questions about Strand. It all goes back to Victor Strand.

If you have any answers to my questions, then please tell us by giving some feedback! As always, we love to get audio feedback, but we will take whatever we can get! For the next episode, Fear the Walking Dead Season 2 Episode 4, titled Blood in the Streets, please submit your feedback by 6 PM Eastern/5 PM Central Tuesday, May 3, 2016.