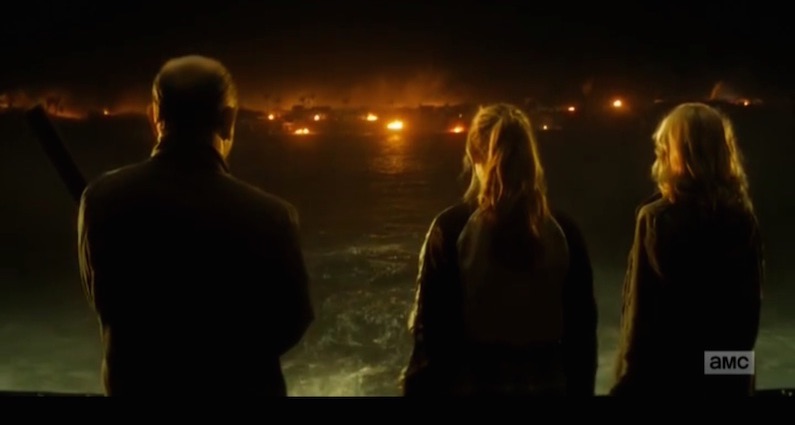 Monster is the first episode of season 2 of Fear the Walking Dead, and what a season opener! We find out that the three rules of Strand’s boat are similar to the first two rules of Fight Club, and that some characters are figuring out the new world quicker than others. They left behind a burning Los Angeles for perhaps an equally perilous journey on the sea, but something tells me that they won’t be on the water the whole time (maybe it was that sneak peek on Talking Dead!). Still, it will be interesting to discover the different dangers that the ocean will provide.

They’re on the boat

I’m surprised that Madison was so adamant about helping the stranded people given how pragmatic she seemed last season, but it seems that Travis and she really have reversed their roles. Maybe she just doesn’t want to feel helpless. It’s a terrible thing to realize that even though you may want to help people, you can’t always do it. Kind of like how climbers will cut the rope to save the people above them when they know there is no hope of rescue. Hopefully, she will be able to adjust more quickly and learn what she needs to do to protect her children. Daniel is another mystery, as last season he couldn’t wait to separate himself from Madison and Travis, but now it seems that he has hitched his and Ofelia’s wagon to their star. And then there’s Strand, the biggest enigma of them all. We still don’t know why he decided to save Nick’s group, but I maintain that he really does like Nick. I just don’t know why yet. So who is the monster?

We always want to hear from you, but we especially like getting your audio feedback! Or you can go to our Facebook group and leave something on our feedback thread. Please send in your feedback for Fear the Walking Dead, Season 2 Episode 2, titled We All Fall Down, by 6 PM Eastern/5 PM Central Tuesday, April 19, 2016.